Gyrotron vs Magnetron vs Orbitron vs Peniotron vs Ubitron | Difference between

This page compares Gyrotron vs Magnetron vs Orbitron vs Peniotron vs Ubitron and mentions difference between Gyrotron, Magnetron, Orbitron, Peniotron and Ubitron.

• Gyrotrons operate in mm wave frequency band typically between 30 GHz to 300 GHz.
• They are narrower in bandwidth
• They are capable of CW operation at very high power. More than 7 GWatt of pulsed powers are achieved.
• They are being driven by high energy electron beam similar to linear beam tubes. Mono-energetic beam of high quality is essential.
• High frequencies need large fields.
• It will have theoretical efficiencies on the order of about 70 to 90%. 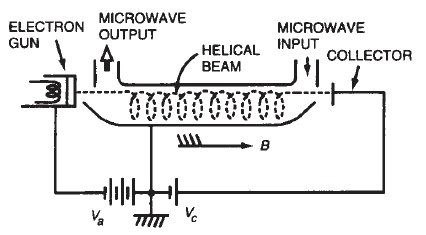 As shown in the figure-1, microwave frequencies in the waveguide interact with helical beam. In this type of single coil tube, helical beam is generated into TE10 mode waveguide having rectangular size. Here microwaves travel from right to left while helical beam travels from left to right. If microwave frequency, magnetic flux density and acceleration voltage are adjusted properly the device acts as backward wave amplifier.

Electrons in this tube interact with transverse microwave electric fields which are velocity modulated at left side of waveguide as beam enters into waveguide.

The the gyrotron is formed when electron gun is modified to incorporate side emitting cathode and waveguide is changed to provide TE11 mode in oversized circular waveguide. Here both ends of the waveguide are open which results into sufficient reflections in waveguide for positive feedback. Due to this Gyrotron is called as forward wave oscillator.

There are two types of gyrotron viz. single coil and double coil. The single coil helical beam gyrotron is depicted in the figure. 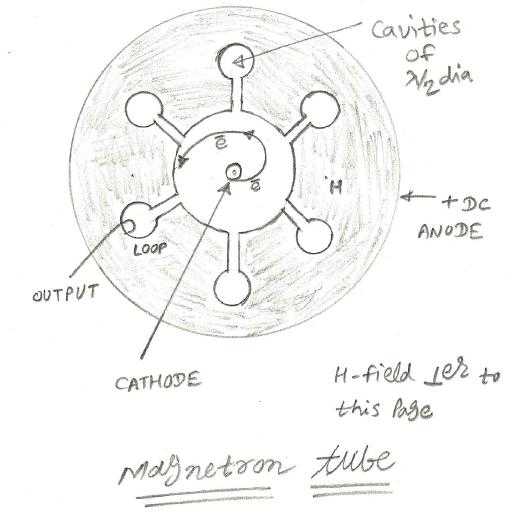 Magnetron is different compare to normal tube. Here the electron beam is being forced to follow spiral path from cathode to anode by application of external magnetic field.

It is also used as one of the high power microwave source. This device orbitron produces power at millimeter and sub-millimeter wave frequencies. The radiation occurs at 1 Watt power levels. They are used as bridge between microwave tubes and lasers.

In gyrotron, if electrons are accelerated by extreme high voltage, they become relativistic. This means mass of electron becomes function of velocity as expressed below. 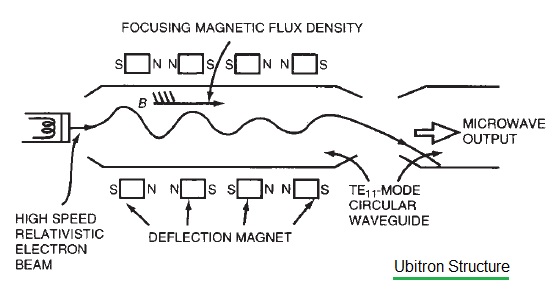 This principle is used in the Ubitron. It is called free electron laser. The ubitron operates at frequencies in millimeter or sub-millimeter waves. It typically operates at high power levels.

The figure depicts schematic diagram of an Ubitron. As shown electron beam at high speed is emitted from gun. It is focused using applied DC magnetic flux density (B). It is periodically deflected using magnetic means. This repetitious deflections will create high and low energy states of electrons. If electrons having high energy state are stimulated by resonance frequency of waveguide resonator, downward transition occurs. The emission at microwave frequency occurs due to energy transitions at stimulation frequency.