This page compares Bit rate vs Baud rate and mentions difference between Bit rate and Baud rate used in data communication with examples.

There is another parameter known as signal elements which is used to map data elements to make them suitable for transmission over the channel. Line coding techniques such as unipolar, polar and bipolar are used to convert bits to digital signal.

The figure depicts data elements and their signal elements representation as described above.

• The data rate or bit rate defines number of data elements (i.e. bits) transmitted in one second.
• The unit of bit rate is bits per second or bps or bits/sec.
• It can also be represented in kbps (Kilo bits per second) or Mbps (Mega bits per second).
• The bit rate or data rate of the digital system should be high so that users can experience higher speed of transmission. 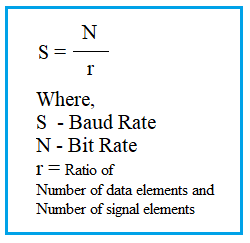 • The signal rate or baud rate defines number of signal elements transmitted in one second.
• The unit is baud.
• It is also known as pulse rate or modulation rate or symbol rate.
• The signal rate of the digital system should be low which helps in conserving bandwidth usage. This makes system bandwidth efficient.

The relationship between bit rate and baud rate is expressed in the above formula or expression.