This page compares WiFi 6E vs WiFI 6 and mentions difference between WiFi 6E and WiFi 6.

Introduction:
Wi-Fi 6E extends use of WiFi 6 developed as per IEEE 802.11ax into 6 GHz frequency band. This new wifi spectrum occupy up to 1.2 GHz and supports about 7 channels in 160 MHz bandwidth. 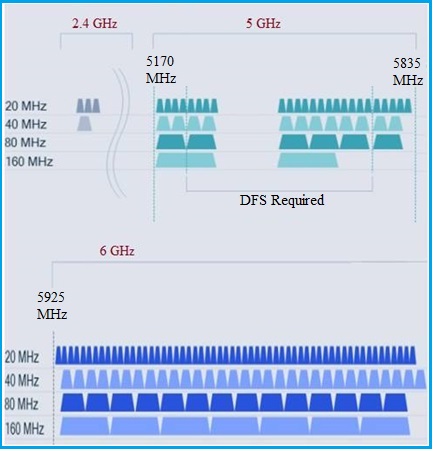 The figure depicts different bandwidths and channels supported by WiFi 6E in various frequency ranges. The same is mentioned in the following table.

WiFi 6E devices together with Bluetooth 5.2 offers wire class voice and music quality wirelessly. Latest Qualcomm FastConnect chips 6700 and 6900 are designed to support wifi 6E. These are being used in smartphones and VR headsets.

Difference between WiFi 6E and WiFi 6


Conclusion: Due to high bandwidth, low latency and more number of channels it is the future of next generation wifi. As mentioned it enables 4K/8K video streaming, real time cloud gaming, real time data transfer at high speed, IoT (Internet of Things), 5G and more.