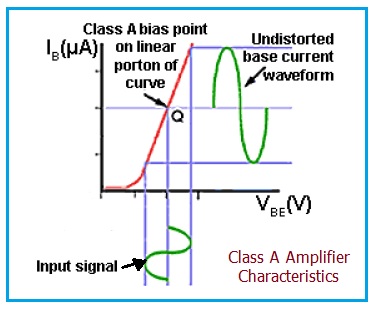 The main role of class-A bias is to keep amplifier free from distortion by keeping signal waveform out of the non-linear region which exists between 0V and 0.6V. The figure-1 depicts class A amplifier bias characteristics. 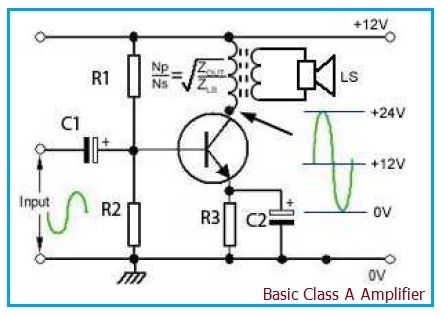 The figure-2 depicts basic class A Power amplifier. The efficiency of class-A PA is improved by placing output transformer instead of resistor as its load. 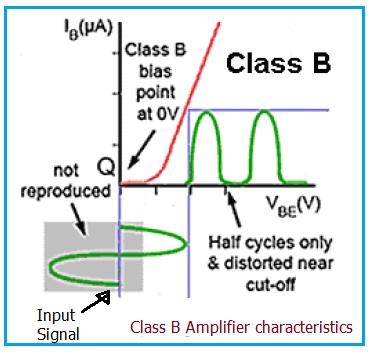 The figure-3 depicts class B amplifier bias characteristics.
• The transistor in the circuit conducts for only half of each cycle of signal waveform as there is no standing bias current (i.e. Iq is zero). Hence efficiency is increased significantly compare to class A PA.
• Efficiency of 80% is possible theoretically with this bias and about 50% to 60% are possible practically.
• It has better efficiency compare to class A.

Though the efficiency is higher, the downside is transistor amplifies only half of the waveform which produces severe distortion. To overcome this distortion, audio amplifiers use a push-pull circuit. 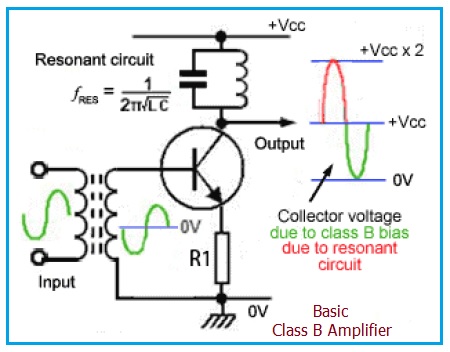 The figure-4 depicts basic class B power amplifier. In push-pull outout configuration, two identical but anti-phase signals from phase splitter are provided to bases of pair of transistors. Here each transistor feeds current to load for half cycle only. Later the two half cycles are re-combined via centre tapped transformer. This will produce complete sine wave in the secondary coil.

Also refer difference between class A, B, AB and C >>.