What is Automotive Ethernet?

Definition: The ethernet used in automotive vehicles such as cars is known as automotive ethernet. It is a physical network which is used to connect various components within a car using wired network. This ethernet type has following features:
• Should support High Data Rate without EMI/EMC problems
• Should meet latency, synchronization and bandwidth requirements. • Power should be delivered over ethernet cables
• Should support distributed network architecture for communication
• Should work with TCP/IP based protocols

Earlier days it was not possible for ethernet to be used in cars and other automotive vehicles due to following reasons.
• Ethernet could not support EMI/RFI requirements with 100 Mbps data rate. RF noise was too much.
• Could not meet low latency requirements in microsecond range.
• It was difficult to control allocation of bandwidth with different stream rate requirements.
• It was difficult to achieve synchronization between multiple devices. 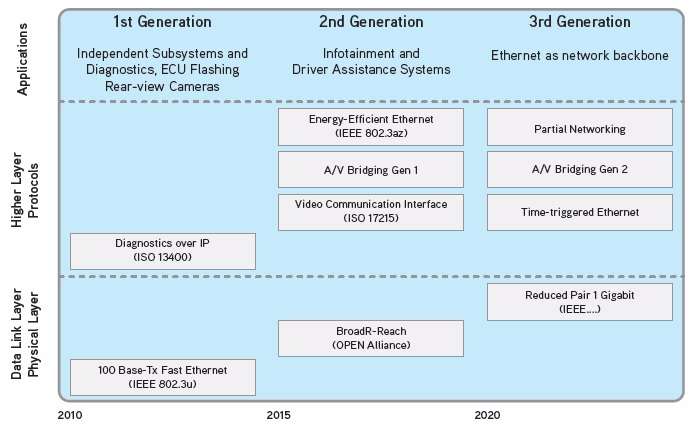 Now-a-days the vehicle consists of advanced driver assistance and control as well as infotainment systems. There are multiple proprietary standards for communication in a car between different vehicle components such as analog signals running on wires, MOST (Media Oriented Systems Transport), flexray, CAN, LIN, LVDS and ethernet technologies. Each component in vehicle has its own wiring and communication specifications.

To meet vehicle specifications new and modification to existing IEEE standards have been developed such as IEEE 802.3 and 802.1.