Introduction : We have seen conventional LED based LCD screens in which LEDs are used to back light front facing LCD panel. In this LCD screen, colors are generated and/or light is dimmed to control the picture on the screen. In this screen, the viewers see based on relative brightness of LEDs as well as LCD's light influencing qualities.

OLEDs (Organic LEDs) are improvement to conventional LED based display where as AMOLED is improvement to basic OLED technology. OLEDs generate light by application of current to different kind of semi-conductive material known as organic compounds. This enables pixel to pixel illumination and color control.

What is AMOLED display screen ?

Introduction:
AMOLED is the short form of Active Matrix Organic Light Emitting Diode. This technology adds TFT (Thin Film Transistor) layer to provide greater control over the light emitted by OLEDs. AMOLED display screen emits colors directly from the organic diodes. Hence it does not require polarizing filters, crystals or any LED backlights as required in LCD display screens. This helps in saving power and slimming of the display screen size to considerable extent. 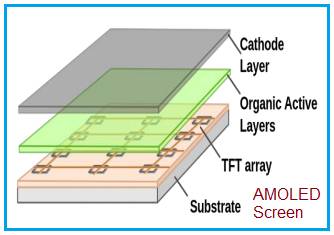 AMOLED consists of four layers viz. anode layer, organic middle layer, cathode layer and Substrate layer. Let us understand these layers.
• Anode layer : It is called layer of positive pole. It creates electron hole in order to dump electrons when electrified.
• Organic layer : It is made of polymers or organic molecules. Here each pixel is activated directly. This layer is stimulated by the circuit which delivers voltage to both cathode and anode materials. The pixels in AMOLED gets turned ON and OFF about three times faster than speed of traditional motion picture film.
• Cathode layer : Based on OLED type, this layer is either opaque or transparent in nature. It serves to inject electrons when electrified.
• Substrate layer : It is also called bottom layer. It serves as base for OLED display screen. It is made of plastic, glass or foil. It contains circuitry.

Following are the benefits or advantages of AMOLED display screen:
➨It offers more colors and true color re-production due to direct pixel to pixel illumination control. Moreover it offers greater contrast ratios.
➨It consumes less power especially while displaying dark screens.
➨AMOLED display screens are lighter and thinner than ordinary display screens.
➨It offers wider viewing angles which is about 170 degrees.
➨It offers super flexibility.
➨These screens are brighter than LED screens.
➨It is easy to produce and can be made in big sizes for example, laptop and PC monitor screens.
➨It resists instant pressure and it is brakeless when it falls from certain height.

Following are the drawbacks or disadvantages of AMOLED display screen:
➨It is higher in cost due to expensive manufacturing process.
➨It offers short lifespan than LED-LCD screens.
➨Due to direct pixel by pixel illumination some OLEDs are used for more duration and hence their performance degrades faster over time. This results into "burn-in effect" in which very brighter screen elements never disappear completely. To alleviate this issue, AMOLED manufacturers are introducing "Auto-Dim" feature for parts of the screen in which long duration brightness are detected.
➨It gets easily damaged by water.