ESD suppressor Basics | How it works

ESD is the short form of Electrostatic Discharge. The devices developed to suppress the ESD is referred as ESD suppressor. Refer ESD basics page which explains sources of ESD, classes and more.

ESD suppressor is used to protect sensitive electronic circuits and devices against high value ESD (about 30 KV or 32 KV) used in high voltage based applications. 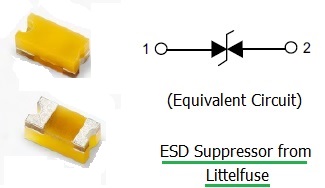 In this application note, we will go through ESD suppressor developed by Littlefuse Inc. Littlefuse has manufactured ESD suppressor bearing XGD series (XTREME-GUARD). The devices are available in 0402 and 0603 sizes. The same ESD suppressor has been depicted in the figure above with top and bottom view as well as its equivalent circuit.

This device is flat topped and used as surface mount device. The body of device is made using glass epoxy and terminations are made using copper or tin or nickel.

Following are the silent features of the ESD suppressor developed by Littlefuse Inc.
• It can withstand very high voltage upto 32KV.
• It has ultra low capacitance.
• It produces low leakage current.
• It helps in achieving fast response time.
• It is bi-directional as shown in the equivalent circuit.
• It is compliant to be used in pick and place type of processes.
• It can also withstand more than one ESD strikes.
• It can operate at wide temperature range from -65 to +125 degreeC
• The device is RoHS compliant.
• It supports specifications as per MIL-STD.

Other Test and Measurement Equipments