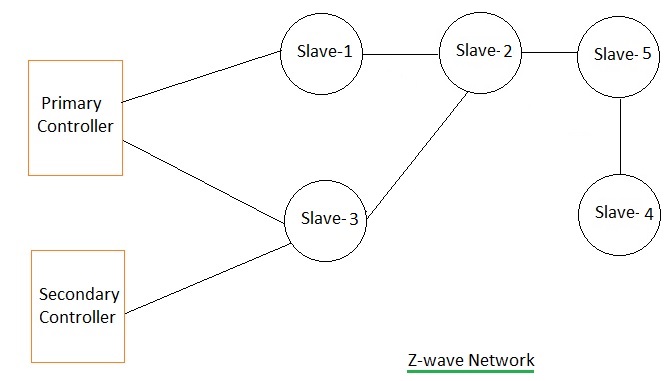 The z-wave network consists of controllers (1 Primary, Multiple secondary) and slave devices. This wireless technology is used for various applications such as home automation, wireless security sensors and emergency alarms. Due to its low power consumption, it is widely used in IoT (Internet of Things) based devices.

Following are the advantages of Z-wave:
➨The zwave network installation is simple and easy. It is also easy to add/remove z-wave devices in the once installed system.
➨The z-wave devices consume less power and hence saves great amount of cost in the battery use.
➨The home appliances are controlled remotely and this will add to great amount of comfort to the users.
➨z-wave devices are interoperable with other wireless devices in the IoT space.
➨The z-wave technology based devices are cheaper and hence technology is affordable to obtain great features/facilities once installed.
➨It uses AES-128 type of encryption to provide secured wireless network for the users.

Following are the disadvantages of Z-wave:
➨The coverage is limited and hence requires more z-wave devices to cover larger region. This increases the overall cost if more z-wave repeaters or routers are employed.
➨The technology requires knowledge to keep it secure from unauthorized people. This is due to the fact that z-wave works on RF (Radio Frequency) and it is wireless in nature which can be accessed from anywhere.
➨It supports only tree topology structure.
➨It supports limited number of nodes i.e. 232 which is less than 65000 nodes as supported by zigbee standard.
➨It supports less data communication speed upto 100 kbps which is less compare to zigbee. Moreover due to less speed, z-wave can only be used for small data size based communication need such as monitoring and control.